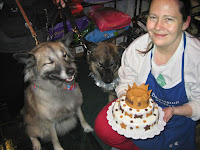 Laura Quinn learned to bake at her grandmother’s side, starting by rolling out pie crusts and graduating to cinnamon rolls. These skills came in handy when she adopted Simon, who coached her to make just the right treats for his paw-ticularly discerning palate. One of his favorite recipes were Cinnayum rolls, a crunchy, dog-friendly version of her grandmother’s recipe.

Quinn’s petite Cinnayums were chosen along with a selection of her other gourmet dog treats to be included in the 63rd Annual Golden Globe Awards® Presenter Package. Quinn is well-trained, and often outsmarted, by her beloved dog and cats. Learn more at LauraQuinnBooks.com. 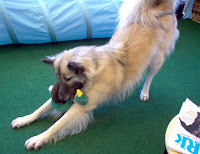 Simon was the inspiration behind the Pawtisserie Mysteries series, as the original fussy eater. From the moment we met him at the shelter, he melted our hearts. Like his fictional counterpart, Simon was very particular about his treats. He taste-tested every batch, seeming to know just when the timer would ring. At night, he was my writing muse, watching his favorite television shows beside me as I typed away. I am forever grateful he was part of my life and miss him dearly.

Thanks to Baron for helping to heal my heart. This adorable puppy has inspired the stories to continue. 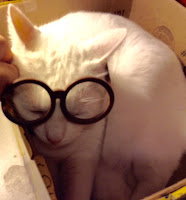 And the purrrfect inspirations for MeowyPenny and Hercule Purrot, who occasionally help edit (when not sleeping). 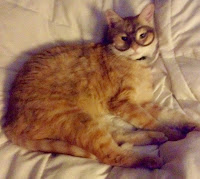